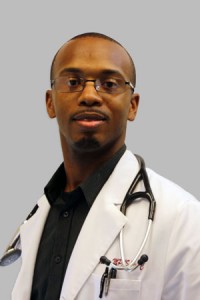 Our Wileyite Spotlight for the month of September shines on Dr. Randy R. Moore,  a member of the class of 2004. Dr. Moore received his Bachelor of Science Degree in Biology. He continued his studies at the University of North Texas Health Science Center in Fort Worth, Texas, where he received his Master of Science degree in Physician Assistant Studies. In 2018, he earned the Doctor of Health Science Degree from Nova Southeastern University in Fort Lauderdale, Florida.

Dr. Moore credits Wiley College with expanding his vision of what he could accomplish in his life and putting him on a career path to achieve his goals.

“Wiley College gave me my chance at life.  Before Wiley, I did not think college was attainable,” he said. “Being the first in my family to graduate high school, I am thankful to Wiley for instilling in me an attitude of being ambitious and persistent.  Wiley is and has always been a family college dedicated to providing a well-rounded education to all who apply themselves.”

Dr. Moore said his fondest memory of Wiley is meeting his wife at the College.  “I first saw her while practicing for a play, but I could not see her full glow until the next day after Tuesday’s chapel.  When I saw her fully, I asked her, ‘do you attend this college?’ When she said ‘yes,’ I ran to my room and told my roommate that I met my wife.”

His future wife was Natasha Jenkins, Class of 2006.  He said they worked together in numerous organizations, including the Student Government Association as well as the Wiley College National Panhellenic Council, where they were active members of Alpha Phi Alpha Fraternity, Incorporated, and Zeta Phi Beta Sorority, Incorporated.  As a result, they became really close friends.

“Natasha and I have now been married for 13 years.  We are the proud parents of two beautiful children, Randy Moore II and Kaylee Ann Moore. “

Dr. Moore has been a strong financial supporter to Wiley College and has donated care packages to incoming students.  He has also been instrumental in reviving the Longview Area Wiley Club.

He not only serves the people of the community, but also serves his country.  He is a Captain in the Texas Army National Guard, where he has served for over 21 years.  He has been deployed to Iraq, Afghanistan, and Guatemala. He has two articles published in the Journal of the American Academy of Physician Assistants: “Using the 150 rule to prevent hepatotoxicity from acetaminophen,”JAAPA 32(4), 51-53; and “The latest diagnostic criteria and treatment options for neuromyelitis optica,” JAAPA 32(7), 1-6.

He currently works as a Family Medicine Physician Assistant at Wellness Pointe Family Health in Longview, Texas.  He attends Marshall Full Gospel Holy Temple Church under the leadership of Bishop Larry B. Kiel Sr. He is a native of Fort Worth, Texas.

Taking no credit for what he has accomplished, he knows that without God, none of these things would be possible.  His favorite scripture is Psalm 37:4, “Delight thyself also in the Lord; and He shall give thee the desires of thine heart.”

You may wish him well at randy.pamoore@gmail.com.  Don’t forget to send in your nominations to the Division of Institutional Advancement, care of Ms. Tori Haliburton, at thaliburton@wileyc.edu