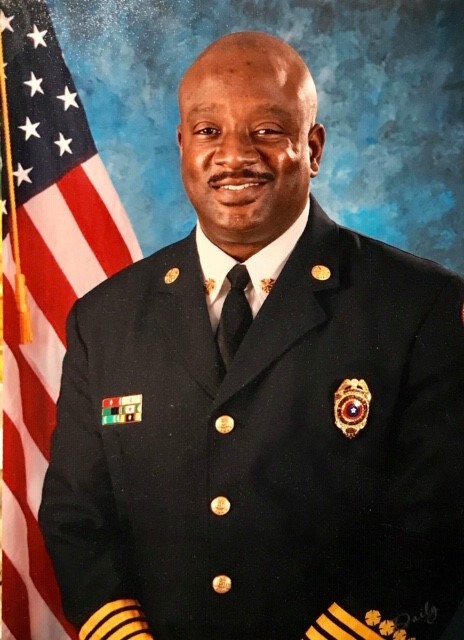 Our Wileyite spotlight for the month of May shines on Reginald Cooper, Chief of the Marshall Fire Department. He is a member of the Wiley College Class of 2008, where he earned a Bachelor of Business Administration degree in 2008.

He began his career with the Marshall Fire Department   in February 1993.  After eight years as a firefighter, Cooper was promoted to Specialist in 2001.  Moving from suppression to prevention, he moved into the Fire Marshal’s Office as an Inspector/Investigator in 2004.  As a Captain, Reggie attended the Police Academy in 2005, obtaining a Basic Peace Officer Certification through the Texas Commission on Law Enforcement Officer Standard and Education, and was then promoted to Assistant Fire Marshal.

In 2007, shortly before earning his college degree at Wiley, Cooper was promoted to Assistant Fire Chief/ Fire Marshal. “Believe it or not, my degree solidified my position as Assistant Chief and made it possible for me to be accepted into the National Fire Academy’s Executive Fire Officer Program in Emmittsburg, Massachusetts,” said Cooper.

Of his fondest memories of Wiley College, Cooper said this, “Besides the exhilarating feeling of graduation day and the exciting speech by Nate Parker, my fondest memories would be the inspiration and learning I gained from Dr. Solomon Masenda and Dr.  Ibrahim Salem.”

Cooper obtained the Associate of Applied Science Degree at Texas State Technical Institute in Waco, Texas.   He has a Master Firefighter certification. In fact, throughout a career with the Marshall Fire Department, Reggie has illustrated an aggressive desire to advance through the ranks of the department while taking a proactive stance on education and departmental diversity.

He has remained active within the MFD, serving on the Hiring board and Pension Board.  Along with serving needy citizens through Meals on Wheels, he also serves as a board member of the local Salvation Army, Marshall’s Prayer Force Board of Directors, the Harrison County Industrial Development Authority Board of Directors, and the MISD Educational Foundation.

Born and raised in Marshall, Cooper has also served Marshall High School as a member of various committees.  He is a member of the Texas Fire Chiefs Association, the International Association of Fire Chiefs, the International Association of Arson Investigators, and serves as President of the East Texas Arson Investigators Association.  As an experienced firefighter and investigator, Chief Cooper now devotes more time to the education of future firefighters through a position as an Instructor at Kilgore College’s Fire Academy.

He and his wife, Doris, are the proud parents of three children, Ieshia Pipkin, Kadarrian Allison, and Shametra Allison, and one grandchild. In his spare time, he loves to inspire others, do yard work, relax and self-reflect.

Don’t forget to send in your nominations to thaliburton@wileyc.edu.