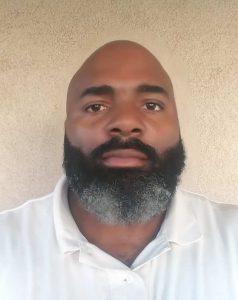 Our Wileyite Spotlight for the Month of November shines on Se-Detreak Smith, a member of the Class of 1996.  He is also a product of Franklin County High School in Meadville, Mississippi.  At Franklin County, he honed his athletic skills in both baseball and basketball and was awarded a baseball scholarship to attend Wiley College. He used his outstanding athletic abilities to walk on the basketball team and became the starter at the point guard position. While at Wiley, Se-Detreak became a member of Omega Psi Phi Fraternity Incorporated, Theta Chapter, and earned his bachelor’s degree in U.S. History.

When we asked Se-Detreak to share his fondest memory of Wiley College, he replied, “It was Homecoming of 1994 when I hit a deep three at the buzzer to beat Rust College. The crowd went wild and mobbed me at half court!!!”

After graduation, he moved to Houston, Texas, and began his professional career working for a number of companies, including Kroger and Fed-Ex, before beginning his career in the oil and gas industry. He has worked as a Structural, Steel, Piping and Concrete Estimator for McDermott International, formerly Chicago Bridge and Iron, for the last 12 years. During his time at McDermott, he has worked at several locations outside of the United States, including United Arab Emirates (Dubai), Canada, Columbia and Australia to name a few.

Se-Detreak has been married to his beautiful wife, Priscilla, a native of Austin, Texas for 12 years. Priscilla received her bachelor’s degree in Accounting from the University of Houston-Downtown, and currently works as a Compliance Officer for Inter-care Holdings Inc. They have a 7-year-old son, Sebastian Johann Smith, who is his “main man.”  In his spare time, Se-Detreak likes to hang out with the family and his fraternity brothers.  He also enjoys going back to Mississippi to deer hunt and fish.

You may wish him well at Sdj_smith@yahoo.com.  Don’t forget to send in your nominations to advancement@wileyc.edu.  Who is up next?  The choice is up to you!