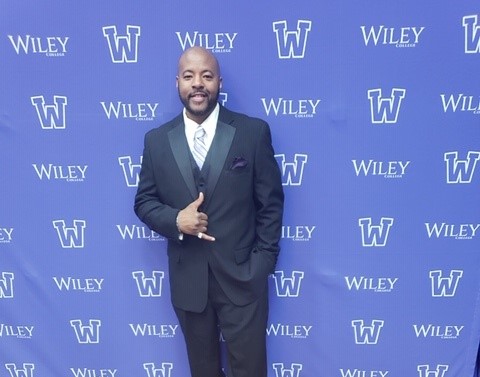 Our Wileyite Spotlight for the month of March shines on Mr. Marvin Taylor, a member of the Class of 2001. Marvin majored in Business Management and minored in Accounting. He is a native of Shreveport, Louisiana. He is a second generation graduate of Booker T. Washington High School in Shreveport.

Marvin was initiated into the Alpha Sigma Chapter of Alpha Phi Alpha Fraternity, Incorporated, at Wiley College in Fall 1996. He is an active member of the Delta Upsilon Lambda Chapter, where he serves on multiple committees and was awarded 2017-2018 Alpha Man of The Year. He was also selected by the National Pan Hellenic Council, Incorporated, of Shreveport as a “Movers and Shakers” Recipient for Alpha Phi Alpha.

Marvin has been a proud Life Member of the Wiley College National Alumni Association since 2008, and he is an active member of the Northwest Louisiana Wiley Club in Shreveport. He is very involved in the life of Wiley College. He has been especially involved in Homecoming and Founders Observance since his graduation.

Marvin currently serves as head of Marketing and Advertising and Committee Chair for Taste of Wiley. He also serves as Director for Membership for the Wiley College National Alumni Association. In addition, he offers his energy and effort toward multiple activities and events in the NWLA Wiley chapter.

Marvin promotes the quote from Wiley College President Herman J. Felton Jr., “Graduates finish school and leave, but Alumni graduate and give back.”

Marvin is the Senior Residential Supervisor at Shreveport Job Corps, where he manages Residential Advisors dealing directly with a unique demographic of students ages 16-24, who are working to earn their high school diploma and driver’s license while learning professional trades. He also is owner and operator of Steady’s Oils, where he specializes in essential oils for homes, offices, and the body.

He is the identical twin of Mervin Taylor, who also graduated from Wiley. Both are Wiley brats of their Dad, Henry Taylor Jr., who was the 2018 Outstanding Alumnus of Wiley College, and Mrs. Estella Jefferson Taylor.

We thank Marvin for being a financial supporter of the College. You may wish him well at martay06@yahoo.com.

Don’t forget to send in your nominations to advancement@wileyc.edu.