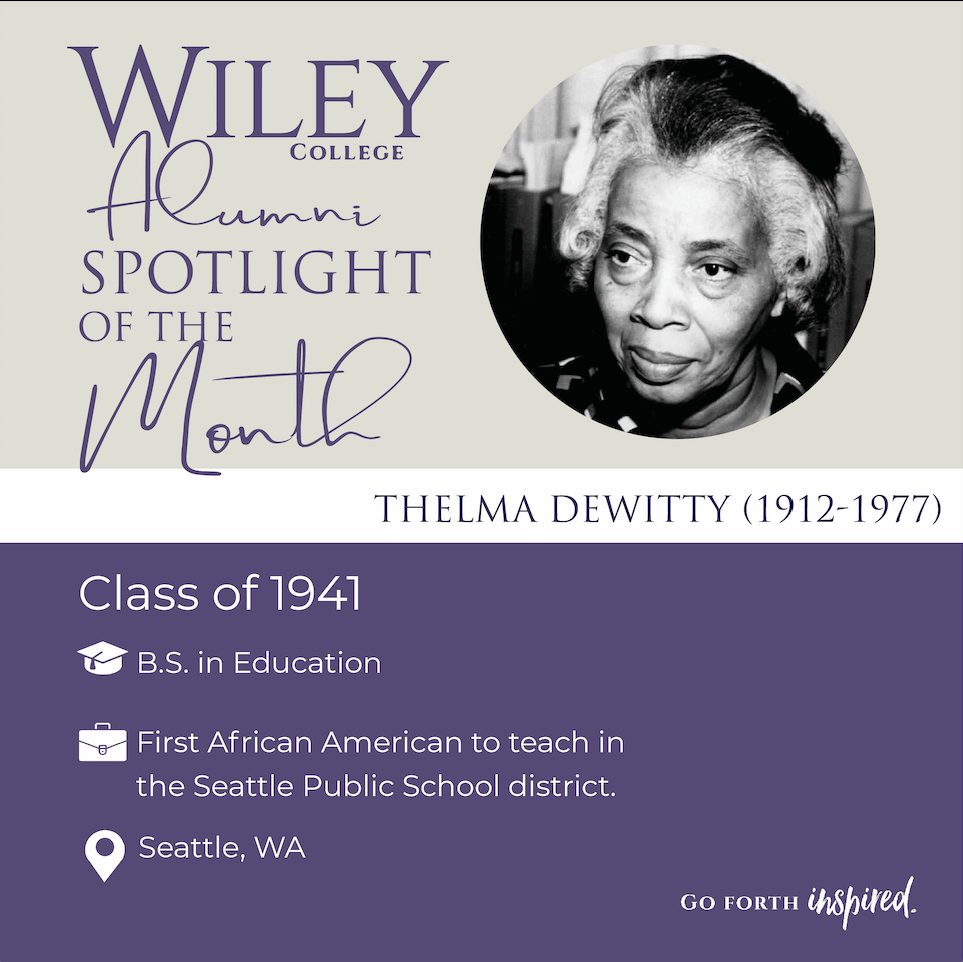 For the month of August, we shine our Spotlight on late alumnus Thelma DeWitty, Class of 1941. Thelma was the first African American to teach in the Seattle Public School district. She was an active member of the NAACP, serving as Seattle branch president in the late 1950s.

Dewitty was born and spent her early life in Beaumont, Texas. She began her career as a schoolteacher in Corpus Christi, Texas, in 1933. In 1941, she received a bachelor’s degree from Wiley College and transferred back to Beaumont the following year.

By the summer of 1947, Dewitty had become a graduate student at the University of Washington and begun writing a mathematics book for children. At that time, her husband was working in Seattle, so she was especially motivated to become a teacher in the area. The Seattle Urban League, NAACP, the Civic Unity Committee, and Christian Friends for Racial Equality encouraged the school system to break the color barrier by hiring her. Ironically enough, some of Seattle’s long-established African American families were unhappy to see this groundbreaking role go to an outsider.

Her first teaching job in Seattle was at the Frank B. Cooper School. Principal Lester Roblee told the teachers that anyone uncomfortable with teaching on a faculty with a black teacher could transfer to another school. One mother objected to having her child in Dewitty’s class and asked that the child be removed; Roblee rejected the request.

Dewitty’s hiring was groundbreaking not only because of her race, but also because she was a married woman. During World War II, the Seattle School Board had relaxed a prior rule against married women teachers. The provision was finally eliminated in 1947, the year Dewitty was hired. Shortly after her onboarding, a second African American woman, Marita Johnson, was hired to teach Household Service at Broadway-Edison Technical School, (the precursor to Seattle Central Community College).

From 1947 until her retirement in 1973, Dewitty taught at a number of Seattle schools. Dewitty is most strongly associated with the Frank B. Cooper School. Because of Dewitty’s involvement in breaking racial barriers at the school, the old Cooper school was granted city landmark status. Several existing articles speak to how she was able to serve as a change agent during such a racially sensitive time.

Beyond serving as a teacher and working with the NAACP, Dewitty served on the Washington State Board Against Discrimination (WSBAD) and the Board of Theater Supervisors for Seattle and King County.

Ms. Dewitty passed away in 1977; however, her legacy lives on at Wiley College.