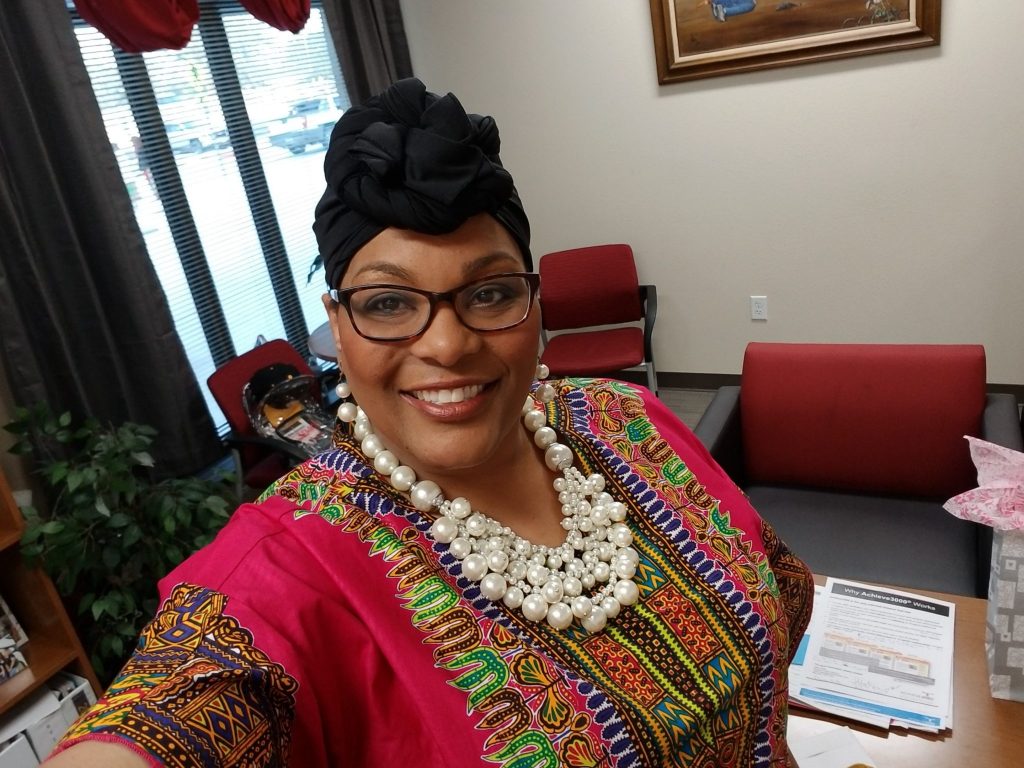 Our Wileyite Spotlight for the Month of October shines on Mrs. Angela Fitzpatrick. She is the daughter of the late Barbara Anderson-Marshall and Winifred Jones Sr. She received her Bachelor of Arts degree in Criminal Justice in 1999, and is proud to represent one of three generations of family members who have attended Wiley College. Her mother, as well as her daughter Taylor Cooer, Class of 2018, are alumnae of the College. Her daughter Ariel Cooper is a freshman at Wiley.

As a member of Wiley’s A Cappella Choir, her fondest memories of her time at the school are traveling to Chicago for the choir tour and attending choir classes with Dr. Earl B LaRue. “I also enjoyed and still enjoy attending Homecoming and the Founders Observance every year with my classmates and other Alumni,” said Angela.
Angela has had a strong career in the Criminal Justice System and Politics. Her calling and passion also led her to education. She earned her Master of Education in 2010 from Le Tourneau University. Most recently, she began working on her superintendent’s certification through Texas A &M – Texarkana.

She has served as an Aide, Teacher, Assistant Principal, and Principal at Sam Houston Middle School. She currently serves as the Principal at David Crockett Elementary. Angela believes education is the key to success that touches every profession today.

Instilled in her at an early age, Angela is committed to community service. She is an active member of Alpha Kappa Alpha Sorority, Incorporated. She is an officer in the Delta Kappa Gamma Society. She serves as the Financial Secretary of the Wiley College National Alumni Association. Angela takes pride in the fact that she was part of the 2015 City of Marshall delegation that traveled to Denver, Colorado, to compete for and earn an All-American-City Award. She was nominated by her superintendent to be a 2014 Turnaround Principal, and she is a 2016 Distinguished Honorary member of the National Society of Collegiate Scholars. She also serves as a board member of the local Boys and Girls Club.

Angela is committed wholeheartedly to making a difference by inspiring others to find their joy, and by preparing our young and seasoned of today to confidently embrace their tomorrows. Highlights and special moments in her life include spending time with her family, singing, and enjoying the Thanksgiving through New Year’s Day family traditions that started twenty-two years ago.

Angela is an active member at New Bethel Baptist Church of Marshall, Texas. She has been blessed to be married to Curtis for fifteen years, and together they have four wonderful children: Ariel, Taylor, Kameron and Jayden.

You may wish her well at fitzpatrickar@marshallisd.com. Don’t forget to send in your nominations to advancement@wileyc.edu. Who is up next? The choice is up to you!

Don’t forget to send in your nominations for the Wileyite Spotlight! Please send nominations to advancement@wileyc.edu. We look forward to seeing who we will celebrate next!