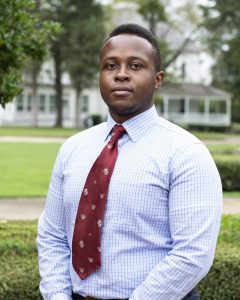 Wiley student Basil Masaisai has been named a  2018 White House HBCU Competitiveness Scholar.  Mr. Masaisai is one of 63 Scholars from 54 HBCUs selected by the White House Initiative on Historically Black Colleges and Universities to receive its highest student recognition .  Like all scholars on their respective campuses, Masaisai had the honor to be nominated and endorsed by the president of his college, Herman J. Felton Jr., as Wiley’s candidate for the program. Students were selected based on their academic achievements, leadership skills and civic engagement.

Masaisai is a junior from Harare, Zimbabwe, who is majoring in Biology and minoring in Spanish at Wiley. He serves as the Vice President of the Wiley College Chapter of the Alpha Mu Gamma Foreign Language Honor Society and is a member of the National Society of Collegiate Scholars.

Masaisai and his fellow scholars will be formally recognized in Washington, D.C., when they attend the National HBCU Week Conference September 16-19, where they will  participate in workshops designed to improve leadership, encourage ongoing personal and professional development and discover areas of innovation and entrepreneurship.

The WHIHBCUs has set the goals for each scholar  during their year of service, and they include  learning  and sharing  proven and promising practices that support individual and HBCU competitiveness, with the outcome of strengthening prospects for career and life success.

The Wiley College family is  proud of this Wileyite and looks forward to  supporting and encouraging  him during his year of service.