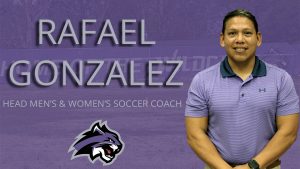 Wiley College is pleased to announce it is reinstating the men’s and women’s soccer programs and hiring Rafael Gonzalez as head coach.

The announcement was made during a press conference in Alumni Gymnasium on Thursday. Gonzalez will become the fourth men’s head coach and the sixth women’s head coach in program history. He joins the Wildcat Family after spending the last five years as the head men’s and women’s coach at Ranger College (Texas).

At Ranger College, he led the Rangers to the Regional and Conference titles in 2017, earning National Junior College Athletic Association Region 5 Coach of the Year. Ranger finished as District runner-up. Gonzalez led them to a regional runner-up finish in 2018 and 2021. He led the Rangers to 26 wins in five seasons.

His women’s team was Regional Runner-up in 2018, Spring 2021, and Fall 2021. Last fall it earned a Top 20 ranking finishing the season 9-1-2. In five seasons, Gonzalez led the Lady Rangers to 18 victories. Both teams were strong academically, as the men held a 3.2 grade-point average and 90 percent of his players earned their associate degrees. His women’s team held a 3.5 GPA with 90 percent graduating with their associates.

Before, Ranger College, Gonzalez started the men’s and women’s programs at Jacksonville College (Texas) in 2012. He led the men to 11 victories and the women to 16 in four years. Both of his teams had 90 percent of their players earn their associate degrees.

Gonzalez started his career as head men’s and women’s soccer coach at Lon Morris College in 2009. Both of his teams held grade-point averages above 3.0 and graduated 90 percent of his students. Gonzalez is looking forward to getting started at Wiley College.

“It’s a dream, I’ve always had,” Gonzalez said. “I’ve coached at the junior college level the last 15 years, it’s a dream for me to coach at the university level. Coming to Wiley College, I believe it’s God telling me this is the place He’s going to prosper me. I’m looking forward to building the soccer programs and continuing the great success the previous coaches had here.”

The programs will compete as a club team this fall, giving Gonzalez time to recruit and build a competitive team for the Fall 2023 season. Wiley College will begin competing in the Gulf Coast Conference this fall.

The men’s program existed between 1995-2005 and 2011-2018. The Wildcats had the most success in their second stint winning 52 matches. They won the 2015 Red River Athletic Conference Tournament and advanced to the NAIA Opening Round. Overall, Wiley College made four appearances in the conference tournament, it also reached the final in 2016. The Wildcats had eight All-Conference selections.

The first women’s team competed from 2012 to 2018. After winning six games in their first three seasons, the Lady Wildcats won 30 in their final four. They made three appearances in the Red River Athletic Conference Tournament, advancing to the semifinals in 2015 and 2017. Fourteen players earned All-Conference with eight earningfirst team.