Wiley College receives approval, accreditation from SACSCOC to offer Bachelor of Arts in Film and Theatre 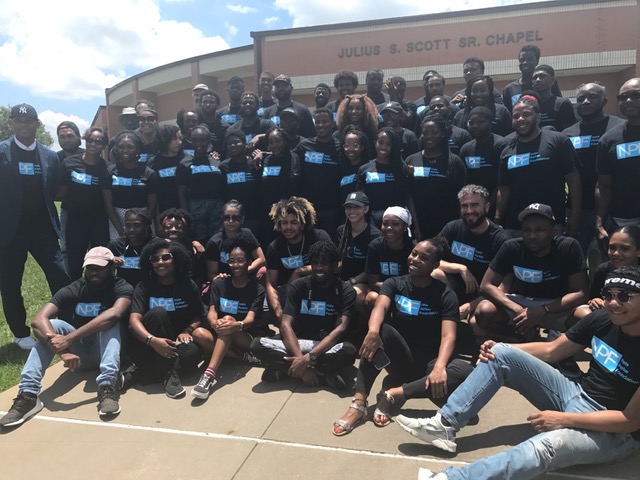 In photo is the 2019 Summer Class of the Nate Parker Summer Film Institute. They are pictured with President Felton, far left, and Nate Parker, center.

Wiley College has received accreditation from the Southern Association of Colleges and Schools Commission on Colleges (SACSCOC) for a Bachelor of Arts Degree program in Film and Theatre. Wiley College President Herman J. Felton Jr. announced the news Friday while welcoming the 2019 Summer Class of the Nate Parker Summer Film Institute to campus. The program will be named for Wiley trustee and Summer Film Institute Founder, Nate Parker.

In making the announcement, President Felton praised Nate Parker for working with him and the College to transform the dream of offering a film and theatre degree program into reality. He also praised Parker’s work over the years with the summer film institute.

“My mother always said ‘I’d rather see a sermon than hear a sermon,’” said Felton. “Nate Parker is a sermon.” Noting that “If you build it they will come,” Felton said that together they are dreaming big for Wiley’s growth overall and for it to become the premier training ground for future filmmakers.

Felton said the College will begin recruiting students into the program for the 2020-2021 academic year. First, however, the school will renovate the theater in the Wiley Pemberton Complex.

Nate Parker is a longtime supporter of the College. His relationship with Wiley began 10 years ago when he appeared in “The Great Debaters,” a 2007 film based on the 1930s Wiley debate teams. He founded the Nate Parker Summer Film Institute in January 2016 and kicked off the first program in July 2016. Now in its fourth year at Wiley, the program has served close to 200 college students and high school seniors from around the country.