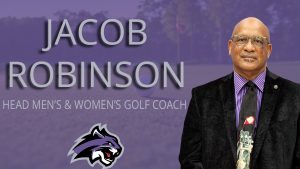 The announcement was made during a press conference Monday at the Freeman P. and Carrie E. Hodge Center. Robinson has over 30 years of experience in golf, playing in various tournaments. He’s coached youth golf as part of the first tee program. He brings nine years of collegiate coaching experience – which includes a three-year stint as the head baseball, softball, and volleyball coach and Associate Athletic Director at Wiley College. He was also a physical education instructor and taught golf.

“My main philosophy is I dream, I plan and I do,” Robinson said. “That’s what I’m basing the whole program on. … I’ve already made contacts in Texas City, St. Louis, Missouri, Dallas, Houston, and Detroit, Michigan. The ball is rolling. I’m an avid golfer. I take a lot of pride in doing things the right way – Academics first.”

Before Wiley College, he was the head baseball coach, physical education instructor, and athletic counselor at Kentucky State University. He led the team to the District playoffs in 1977 and 1978. He led them to a third-place finish in the 1976 NAIA World Series. From 1973 to 1976, Robinson was a graduate assistant, head baseball coach, and physical education instructor at Tennessee State University.

“We are really excited about each of our new coaches,” President Herman Felton Jr. said. “We are excited about what we have to offer and the emphasis we are putting on our athletic programs.”

“There’s a golf saying it’s not a successful golf shot unless it goes into the hole,” said Bruce Peifer, Associate Vice President of Athletics and Strategic Retention. “Ultimately, you got to put the golf ball in the hole. We think we got an ace in the hole with Coach Robinson.”

Robinson played baseball at Dyers State Community College. In his sophomore season, he was fifth in the conference with a .400 batting average. He played his junior season at David Lipscomb University where he was voted Most Valuable Player. Robinson was invited to special tryouts for the Cincinnati Reds, Milwaukee Brewers, and Philadelphia Phillies. In high school, he played basketball at Union City, Tennessee. He helped them reach the state tournament in all four years. He was an All-District and All-Regional player in his junior and senior seasons. He was Most Valuable Player in his senior season. Robinson was inducted into the Union City Hall of Fame.

After Wiley College, Robinson held various referee positions, including at the college level in the IAC and Big State Conference, in which Wiley College participated. He was an official at an Olympic trial baseball game between the United States of America and South Korea in Shreveport in 1988. Since 1987, he has worked as an official assigner for leagues in Longview, Texas. He is the state commissioner of the Minor Girls Softball.

The programs will start as club teams in the Spring of 2023, giving Robinson time to recruit. The teams will have full varsity status in 2023-24.