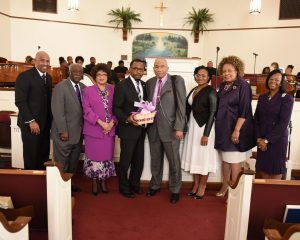 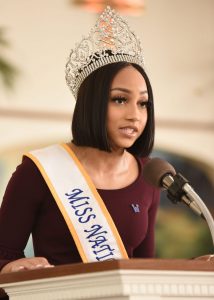 With the sermon entitled, “He’s Not Through with Me Yet”, Pastor James E. Webb encouraged the audience to “go forth, inspired” knowing that God is still working on them.

The Wiley Day program included performances by the Serenity Dance Team and Wiley College choir. Led by Dr. Greggory McPherson, the choir incited the Holy Ghost in the crowd with their spiritual selections and soprano solos.

The service concluded with a donation presented by Wiley alumnus Deacon John Wilburn and the Wiley Day committee at Bethesda. “It is a blessing to have such a wonderful relationship with (Bethesda) who has supported us for over 20 years now,” said Marcel McGee, vice president for institutional advancement. 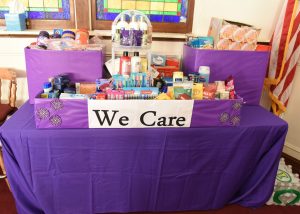 In addition to the monetary donation, the Church also donated food pantry supplies to the Wiley College food pantry. “We are also greatly appreciative of their donation to our Wiley Cares food pantry initiative,” said McGee.

Established over 150 years ago, Bethesda Missionary Baptist Church has supported Wiley both financially and spiritually since 1873. “Our Wiley Day celebrations happen throughout the year,” explained Cornish III. “Bethesda is one of the College’s top supporting churches. The members take pride in investing in Wiley,” said Cornish.

Wiley College is accepting donations for Wiley Cares initiatives. Visit www.wileyc.edu/wileycares to learn more about the program and ways to give.