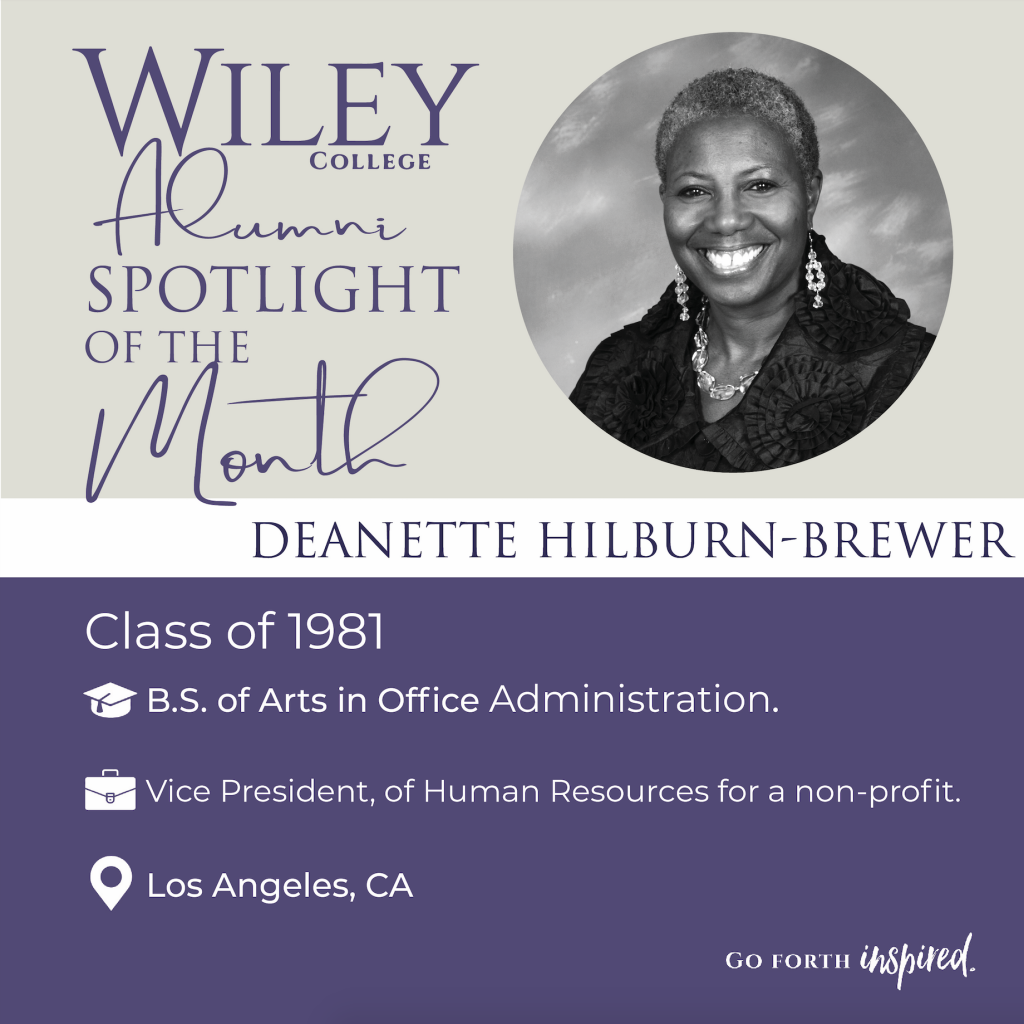 Deanette Hilburn-Brewer grew up hearing stories about “Ole Wiley Dear” long before she knew she would become a Wildcat. Her family’s Wiley tradition began in 1946 when her aunt enrolled at Wiley as a freshman and her mom followed in her footsteps in 1950. Deanette’s paternal family is from Marshall, Texas and her dad and his brother also attended Wiley. The insatiable Wiley College pride had been running through her veins for more than five decades, and as fate would have it, the Lord guided Deanette’s footsteps to Wiley in 1977.

Deanette attributes her four years at Wiley as among some of the best years of her life. She embraced the rigorous education curriculum along with the fun social life steeped in Christian values. Her fondest memories include: as a freshmen, being required to memorize the Black National Anthem. Then, as a sophomore, her initiation into the most illustrious, phenomenal first black Greek letter sorority, Alpha Kappa Alpha Sorority, Inc. As a junior, serving as “Ms. Junior” on the Wiley court and as a junior, her induction into the Alpha Kappa Mu Honor Society by the late Dr. Truby B. Clayton. There were many professors who influenced her strong work ethic, political consciousness, and black pride. Dr. Steven Favors, Dean of Students, instilled in her to always strive for excellence and that God is the only one who could determine her destiny. She still cherishes his graduation gift to her, “The Book of Psalms.” Dr. Earl B. Larue always held her accountable and taught her to be on time was to be late and to be early is to be on time. He would always say, “Get your buns up and be ready to start your day, because while you are sleeping that someone else is up planning and plotting on how he is going to stay ahead of you.”

Mrs. Hilburn-Brewer’s lifelong friendships from Wiley now span over 40 years. She says the village is real and very important. Deanette holds her Wiley family extremely near and dear to her heart. She adores her wildcat family and says, “We continuously encourage each other to go forth inspired. As we stand on the shoulders of our ancestors, we have an obligation to prepare the next generation of scholars, to share the rich Wiley legacy with our Generation Z, the new silent generation. We must use our resources and financial support to ensure our young black youth have the same experiences to thrive as individuals and not numbers. We must encourage them to become productive citizens of society and to impact and change the world.”

Deanette’s personal mantra is “Service is the rent we pay for being alive.” For more than 35 years Deanette has worked in the nonprofit sector. She goes on to say, “The most rewarding gift for me is to give back to my community and under served communities.” Deanette currently serves as the Vice President, of Human Resources for a non-profit in Los Angeles, California.​