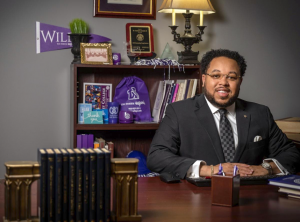 Charles H. Cornish, III, is the newly-appointed Executive Director of Alumni and External Relations Wiley College welcomes and embraces our very own Charles H. Cornish, III as the newly-appointed Executive Director of Alumni and External Relations- a newly created position in the Division of Institutional Advancement which is charged with keeping old friends and making new ones. Mr. Cornish is uniquely qualified to fulfill the responsibilities of this expanded position because he is an alumnus who has an extensive background in fundraising and a network of friends and colleagues with whom he has served on numerous organizations in the City of Marshall and throughout the country. In addition to strengthening ties with alumni, he will be drawing on the goodwill he has engendered through community service to continue advancing Wiley College as one of the country’s premiere church-related Historically Black Colleges and Universities (HBCUs).

Senior Vice President of Institutional Advancement, Dr. Anthony Neal is thrilled about Cornish’s transition stating that, “Charles Cornish is very well suited to fulfill the responsibilities associated with this position. He has demonstrated not only a passion for Wiley College but also a passion and commitment to the City of Marshall and Harrison County. He exemplifies the true values and character of a Wileyite In addition, he has increased alumni giving by seven percent (7%) and overall, has raised more than twelve million dollars from individuals in the form of endowed scholarship and other naming opportunities.”

Cornish cites the city of Marshall as his home and notes that it has greatly inspired his hard work. He holds several local positions including board member for the Marshall Symphony, Marshall Regional Arts Council, Boys and Girls Club of the Piney Woods, Harrison County Historical Museum, the Marshall Public Library, and formerly served as Rotary Club President. Cornish believes that through these organizations, he can attract new friends for the College.

Cornish stated that, “As an alumnus of Wiley College and a very proud graduate of Leadership Marshall, I am honored to have been tapped to serve in this expanded role and am committed to being a good steward of the faith placed in me to keep old friends and make new ones.” Continuing, Cornish said that he “looks forward to fostering an even greater sense of Wildcat pride among my fellow alumni and generating more engagement with, and support for Wiley College throughout the community and building more affinity among alumni.”