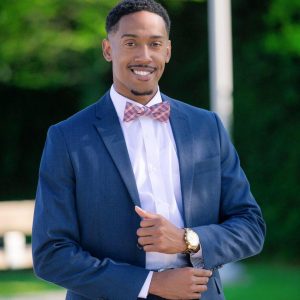 Our Wileyite spotlight for the month of November shines on Mr. Joseph Stevens Jr. He is a native of Beaumont, Texas and the son of Joseph Stevens Sr. and Sharon Stevens. He graduated from Wiley College in 2017 with a Bachelor of Business Administration Degree with a concentration in Management.

As a result of his campus involvement, he was one of three male recipients chosen from Wiley to receive the Tom Joyner Hercules Scholarship. The scholarship highlighted his community involvement and academic endeavors. In addition to his academic performance Stevens was extended the invitation to intern in Beijing, Hangzhou and Shanghai, China by the International Scholar Laureate program which he accepted gracefully.

His fondest memory at Wiley College was racing back to Jackson Hall after gathering to play a large game of “Cat and Mouse” at a nearby park freshmen year. He stated “The memory still gets me excited to this day. It would literally be a group of 30 or more freshmen on a Friday night with absolutely nothing to do. We’d play all of our favorite childhood games then someone would yell out ‘it’s almost midnight.’ And as a result, we’d stop what we were doing and run for the dormitories.”

Stevens is a recent MBA graduate from the Colangelo College of Business at Grand Canyon University in Phoenix, Arizona. He is currently the Chief Executive Officer of Sumptuous Consulting, LLC. which is a startup management consulting firm. While serving in his position, his focus is to ensure their clients’ needs are met in a timely manner. Find out more at www.sumptuousconsulting.com.

Outside of work, Stevens is a member of Shiloh Missionary Baptist Church. He enjoys reading, exercising and traveling. Stevens also loves to volunteer. He recently began volunteering at the Catholic Charities Hospitality Center of Southeast Texas where he helps prepare meals and cleans.

Wiley College thanks Mr. Stevens for being a financial supporter of the Institution.

You may wish him well at josephstevens134@gmail.com. Don’t forget to send in your nominations and supported documents to thaliburton@wileyc.edu.