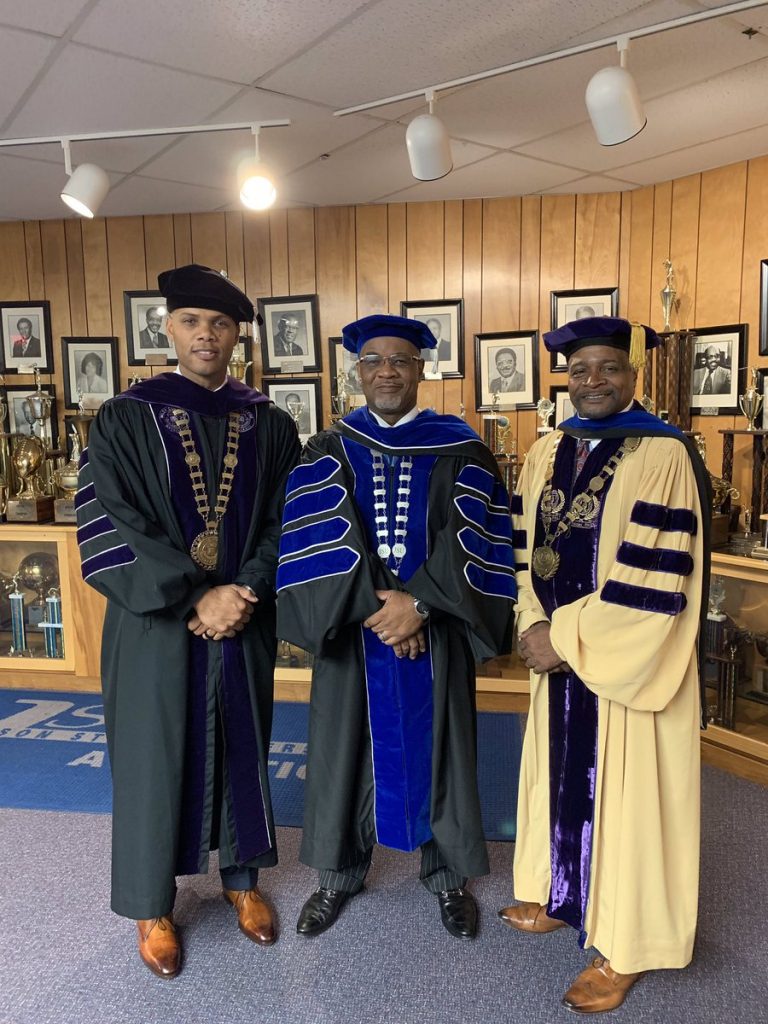 It has been an arduous, challenging and triumphant journey for Wiley College President Herman J. Felton Jr.   One could say that statistically,  the Jacksonville, Florida,  native was never supposed to make it out of Jacksonville, obtain a doctorate or become one of the youngest presidents of an HBCU for that matter.

A product of poverty, he was the third child born to a 17-year-old mother. Felton shared that his grandmother died when his mother was 13, and his grandfather, a Navy and World War II veteran, was left irretrievably broken.

“His soul died when his wife died,” Felton said. “So, my mom was essentially raised by her older sister.”

Eventually, Felton’s mother struck out on her own. By the time she was 25, she was raising six children alone. “We grew up in the inner city of Jacksonville, and I did everything that everyone else did in my housing complex,” he states, offering no further clarification on what that “everything” was exactly. Perhaps some things are better left unsaid, plus those days are far behind him now, and he has accomplished so much with so little.

At 18, he had a 1.29 GPA and failed to finish high school. Instead, he joined the U.S. Marine Corps where he was diagnosed with dyslexia. “That was a blessing. It crushed the myth in my mind (that I wasn’t smart), that (instead) I was suffering from a learning disability,” he says.

In order to stay enlisted, Felton had to complete his high school diploma or GED within one year. He then confessed to the woman in charge of testing that when he attempted to read words and letters they appeared jumbled.

“She instantly knew what it was and told me to pick out a topic that I really loved, which was black history,” he explains. “She gave me a bunch of books, and we started doing exercises with flip cards.”

Before he knew it, he was reading a full paragraph – a paragraph led to a chapter, and a chapter became a book.

Felton subsequently received his GED, and after spending eight years in the Marines, he was honorably discharged in ’97. Back in his hometown, he sold cars and worked as a collections agent before landing his “dream job” with the U.S. postal service.

However, the Marine said he knew he wanted to pursue higher education. So he enrolled in community college until a recruiter convinced him to attend Edward Waters College and the “rest is history.”

Three years later, Felton graduated with a bachelor’s degree in political science and was awarded a full scholarship to the Levin College of Law at the University of Florida.

What could be considered ironic, Felton points out, is that he was a Virgil Hawkins Scholar. Hawkins sued to desegregate the University of Florida, and the lawsuit waged on for nearly 10 years. Finally, Florida officials agreed to a settlement and extended admissions to all Florida residents regardless of race with the caveat that Hawkins would never enroll.

“But he laid down so that we can stand,” says Felton, who is also the co-founder of the Higher Education Leadership Foundation (H.E.L.F.), an organization established to ensure a pipeline of “transformational, highly skilled and principled leaders are identified and cultivated to meet the needs, challenges and opportunities facing the nations HBCUs.”

Once Felton received his law degree, he was offered a directorship position at Murray State in Kentucky where he was schooled in fundraising, worked in the president’s office and taught government law. As destiny would have it, former Edward Waters College President Dr. Jimmy R. Jenkins Sr., was tapped to lead Livingstone College. He gave the young alum a call and said: “it was time to come home.”

Felton started as Jenkins executive assistant and worked his way up to chief operations officer then senior vice president for institutional advancement.

“It was the absolute best gift a mentor could give a mentee. He gave me an opportunity to understand every facet of an institution,” explained Felton, who had his hands in everything from external relations, managing the cabinet, serving as athletic director to vice president for student affairs while still holding down his duties as VP for advancement.

The 47-year-old said that his mentor extensively prepared him for his next phase in life, which was heading Wilberforce University where he spent two years. Now, the 17th president of Wiley says one of the most important decisions he faces as a leader is ensuring he is doing the right thing on a daily basis.

“No matter how much it hurts or whom that decision impacts, it is a constant struggle to do the right thing without emotion,” says Felton, before adding that some HBCUs are distressed assets. “Not all of them, but some of them. It’s not a negative connotation because it’s still an asset, but it’s distressed at times. You have to figure out how to maneuver what some believe to be monolithic institutions.”

Remaining current and viable while serving students, showing an academic rigor that is uncompromising, while looking forward with the past in mind is Felton’s rule of governance. He explains that a false move like eliminating a program that seems to be the right thing to do but not understanding context can put an administration in trouble.

Apart from vision and core values, the president says Wiley’s mission is the most important to him. “For 146 years, Wiley College has been a continuum of excellence in the civil rights space and liberal arts education, and I want to continue as my 16 other predecessors did,” he says, “which is doing what the United Methodist Church and the school believes to be essential to Americana and that is producing good human beings that transform the world and the people they encounter.”

A distinction that appears to set Felton apart from other university presidents is the fact he wears a fitted baseball cap or “fitted cap” nearly everywhere he goes. He offers no other explanation for his choice in headgear other than he likes it. However, he does mention that the hat engages others and breaks down walls simultaneously without him having to say a word.

“For me, it is a constant reminder to remember who I am, where I came from and whom I represent,” he says.

Trap music is also a consistent part of his routine. Although he starts his morning off with gospel music, when he walks out the door he is “trapping for the rest of the day.” Nuanced in the music are messages that he says resonate with him.

“It’s more about self-actualization than it is about the words. There are so many reaffirming messages to remind you that you have a charge to keep. You are representing many other people. You are worthy. You are capable. You are competent,” he says, before pointing out that implicit to him in the music, whether it be rappers Rich Homie Quan, 2Chainz or T.I. that hustling is not bad, and it is not necessarily tied to “slanging dope.”

“Hustling is about grinding and being excellent and being the best at what you do. It’s a mindset. I challenge myself daily through metaphors and 16 bars. That is where the challenge comes for me, and it is undergirded in the faces of the kids who walk on my campus,” he says.

Although Felton stresses mentorship as critical for individuals ascending to senior-level positions, he also includes understanding board governance, external constituents, fundraising and being student-centered as mainstays of leadership in higher education.

“I welcome students who are active, who question the process. However, I also welcome and favor teaching them how to do that,” he shares.

He exhaled deeply when asked before Friday’s graduation ceremony  how it feels to know that he is receiving his doctoral degree in executive leadership – a degree he has pursued for nearly 10 years. “It is unbelievable to accomplish the task of obtaining the ever elusive Ph. D., so I am grateful, just grateful, to get there,” he says, before crediting Jackson State University President Dr. William B. Bynum Jr. for aiding him in the process.

“Dr. Bynum is a phenomenal individual. I started this program in 2008 with my fellow cohorts, and now George French (president of Miles College) and I, miraculously, are walking out the door together, and it is because of the leadership of Dr. Bynum.”